Madrid, the 1st of March, 2019. The Spanish Development Finance Institution, COFIDES, S.A., S.M.E, has signed up to the #DondeEstánEllas (Where Are the Women?) manifesto, spearheaded by the Office of the European Parliament in Spain.

The COFIDES chairman, José Luis Curbelo, signed the manifesto, which promotes gender equality through the participation and leadership of women experts at symposiums, conferences, debates and meetings so that women can contribute as speakers.

With this step, COFIDES has reaffirmed its commitment to gender equality and support for women, a principle which governs both its internal business dimension and that of the projects it finances.

The commitment made by the signatory institutions involves auditing the outcomes of the project and providing figures concerning the participation rate of female experts in all communications activities, with the aim of improving the percentage each year. Likewise, a campaign to highlight the role of women experts on the panels and to encourage other entities to sign up to this initiative will be promoted in institutional communications and on websites and social networks.

The COFIDES chairman attended the conference #DondeEstánEllas: What is behind the glass ceiling? which was held today at the Madrid office of the European institution and at which the results of the data collected during the first year of #DondeEstánEllas were presented.

Currently, the #DondeEstánEllas initiative is supported by 55 organisations. On Friday, in addition to COFIDES, the signatures of the new participating entities were recorded; public bodies such as the Ministry of Foreign Affairs, the Chamber of Commerce, ICEX, CESCE and the Escuela Diplomática, business organisations such as CEOE and DigitalEs, media outlets such as 20 Minutos and the Diario de La Rioja, embassies, professional bodies and associations. 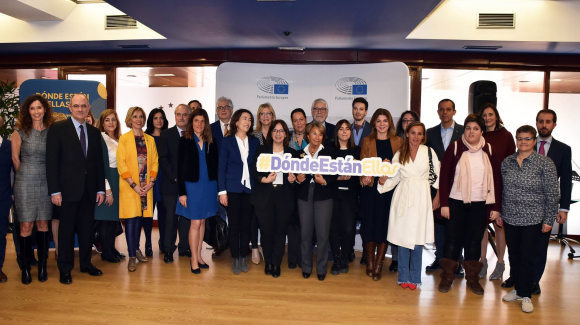