The Compañía Española de Financiación del Desarrollo -COFIDES- has recently approved its 2019-2021 Strategic Plan. One of its objectives is to strengthen the commitment of COFIDES with development and sustainability, a concept currently referred to as “impact investment” (OECD 2013). Moreover, COFIDES is convinced of the role played by Spanish companies in sustainable development, and even more of the role they will be called on to play in future development scenarios.

Development finance is currently undergoing major changes towards a more sustainable and inclusive model in which investments are designed to not only provide return for developers and financiers, but also to have a positive social and environmental impact. The public sector plays a key role in this model. On the one hand, in mobilising and organising the relevant players and contributing to shaping the ecosystem necessary for development; and, on the other hand, as a financier that, in addition to contributing strategic resources, creates demonstration effects that help mobilise resources from the private sector. The overarching goal is to achieve the best return-risk-impact combination from private and public investment.

Impact investment is intimately linked to the achievement by 2030 of the 17 Sustainable Development Goals (SDGs) agreed in 2015 at the United Nations Summit in Addis Ababa. Collective performance objectives were defined at that Summit, and it was found that the magnitude of the global challenges far exceeds the possibilities of individual countries, public administrations and multilateral organizations, companies and the commercial financial system and philanthropic and third-sector organisations. It also stressed the vital role played by the private sector in achieving sustainable development, not only as a generator of wealth and decent employment, but also as a promoter of innovation and a transmitter of knowledge, technology and good governance. The private sector is also identified as an essential player in the fight against climate change and its effects.

COFIDES is certified by different international bodies that contribute concessional resources (the European Union and the United Nations Green Climate Fund) for development promotion. The key objective is to provide solutions and financial structures that make “bankable” projects with a major positive impact.

The first example in Spain of successful coordination between the public and private sectors to make impact investment possible is the Huruma Fund. This fund will be managed by the investing advisory firm called Gawa Capital. The project was presented by COFIDES to the EU within the framework of its foreign aid scheme (better known as ‘blending’). Blended Finance enables a mix of commercial reimbursable resources mobilised by accredited entities, such as COFIDES, with non-reimbursable and/or subsidised resources. The project amounts EUR 100 million and aims to facilitating access to financing for small farmers in Latin America and the Caribbean, Sub-Saharan Africa and Asia. Private sector and COFIDES will contribute EUR 70 million, the EU will provide a tranche of first losses of 10 million, and the rest will come from the Development Promotion Fund (FONPRODE) managed by AECID (the Spanish Aid Agency). The project will also be endowed with non-reimbursable technical assistance of EUR 9 million (8 million of which will come from the EU).

In line with all this, we would draw attention to the data from a report drawn up by Allianz Global Investors recently published in the Spanish newspaper Expansión (4/4/2019). According to it, investments featuring sustainable criteria have already attracted the attention of 89% of Spanish retail investors who consider environmental, social and good governance criteria as elements that should be taken into account when making investment decisions. In addition, 74% of the respondents say that they would likely invest in funds linked to the SDGs. The report also reveals that Spaniards would be willing to opt for sustainable investments because this would encourage companies to improve their policies and ensure that their money “helps change the world”.

In this context, and firmly convinced of the need to move towards a more sustainable economy, COFIDES aims to promote the business and financial ecosystem necessary for the eradication of poverty through impact investment. The company will be increasingly active both in the mobilisation of resources that seek to have an impact on sustainability, and in the promotion of projects where public-private collaboration contributes to improving financing opportunities for sectors, companies and projects that would otherwise be excluded from the strictly commercial financial sector.

* Opinion article originally published in the newspaper Expansión, May 1, 2019. 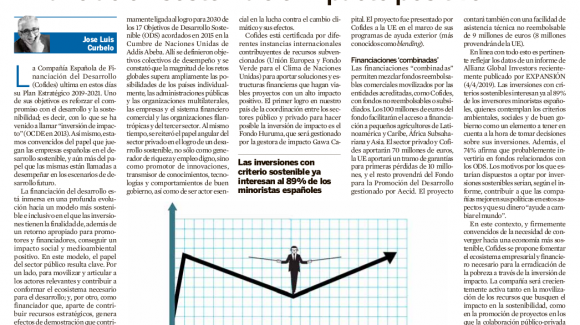